“We have both a moral and ethical responsibility to protect all children and adolescents in our community. We cannot withhold information from children, adolescents, or adults, live in silence about this taboo subject and expect everything to turn out all right. We have tried ignorance and it does not work.”

A few years ago, I began the “Humans are (Blank)-ogamous” series. I originally intended it to be only a few posts that would explore the roles that evolution and culture play in human sexual behavior. The inspiration for it was that several theorists over time had proposed that humans had evolved to be a number of things – monogamous, polygynous, serially monogamous, promiscuous, etc. I wondered how people could look at the same species and reach such different conclusions. Perhaps if I could read enough I might be able to find “the answer.”

From there, the series grew, blossoming into 20+ posts, citing over 200+ references (yes, I counted). I probably could have gotten at least a Master’s Thesis out of this. Anyway, those posts easily have been among the most read things on this site. That’s not because they are particularly brilliant. Rather, I think it’s because people are hungry for credible information and – despite how important the topic of human sexuality is – that can be hard to come by. Having those three magic letters “Ph.D.” after one’s name can help with internet search engine results, but a Ph.D. is no guarantee of being right. Far from it. All that means is that I went to school for a long time. I’m still in school, actually, so there’s always more to learn…

The series has been pretty well received by a number of people I admire, which feels pretty good I have to admit. They’ve been shared on social media, and some posts were even included on different university syllabi. In fact, I taught my own class on the subject last semester, and I think it went very well. When I re-read some of the earlier posts, there isn’t too much that I regret, (which is a good sign – sometimes when I reading my old stuff I sound like Sideshow Bob stepping on a rake).

With all that said, I think I think I’d like to wrap this up by taking the utilitarian approach. If I’m confident about anything that I wrote, and willing to put my money where my mouth is, then what would I emphasize to my students, friends, or (most importantly) to my own children?  I’ll keep some of the lessons I’ve learned private, but here are a few:

END_OF_DOCUMENT_TOKEN_TO_BE_REPLACED

“One of the reasons some cultural elitists – political pundits, novelists, intellectuals – tend to be so unsettled by the Internet is that it has revealed how oceanically broad are the interests of the public in general. Before the Internet, with no way of observing the obsessions of the masses, it was a lot easier to pretend that these obsessions simply didn’t exist; that the nation was “united” around caring about the same small number of movies, weekly magazines, novels, political issues, or personalities. This was probably always a self-flattering illusion for the folks who ran things. The Internet destroyed it. When you gaze …upon the Pacific of strangeness online, you confront the astonishing diversity of human passion.”  — Clive Thompson (2013) Smarter Than You Think: How Technology is Changing Our Minds for the Better

Please bear with me as I try to connect two not very obviously connected ideas: romantic love and our species’ behavioral flexibility. I don’t have it all worked out. Perhaps I’m going down the wrong path altogether.

I started thinking about these things after several friends on social media shared this Mandy Len Catron essay: “To Fall in Love With Anyone, Do This”. Catron describes a time that she and a male acquaintance intentionally tried to induce feelings of romantic love. To do this, they followed two steps, borrowed from a study done by the psychologist Arthur Aron. First, they asked each other a series of 36 increasingly intimate questions. Next, they stared into each other’s eyes for four uninterrupted minutes.

My first reaction when I went through the questions was that I can see how they could elicit feelings of intimacy under the right circumstances and with the right person. To work through all 36 of them would take some time, as they are not typical of everyday conversation. Time itself is could be a factor in bonding. To answer each question would require some thought, as they do not have prepared, canned responses. Some examples from Aron’s list:

This is part of a series on the evolution of human mating behavior, comparing evidence for promiscuity and pair-bonding in our species. Please see the Introduction here. 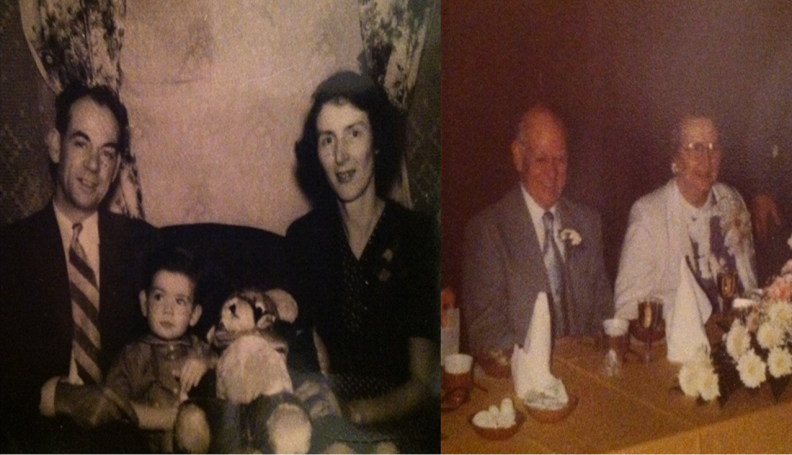 Left: My paternal grandparents with my father as a toddler. Right: their 50th wedding anniversary (it’s the best picture I could find).

Oprah (she needs no last name) was a guest on a morning talk show, and the topic of discussion was two recent articles on the origins of monogamy in mammals (Lukas & Clutton-Brock, 2013) and another specifically on primates (Opie et al, 2013). Both articles are impressive for their large databases and attention to detail. The first looked at 2545 species of mammals while the Opie article examined 230 primate species.[1]

Both studies focused specifically on social, rather than sexual, monogamy. This distinction is important because sexual exclusivity was not what was being measured here. Rather, social monogamy was defined by both studies as simply living in breeding pairs. The Lukas & Clutton-Brock paper added that in social monogamy the pair shared a common territory, and “associate with each other for more than one breeding season” (p. 526).

END_OF_DOCUMENT_TOKEN_TO_BE_REPLACED

This is part 12 of a series on the evolution of human mating behavior. Please see the introduction here.

This video is a lecture by the cultural anthropologist William Jankowiak speaking at my alma mater, Binghamton University, on what he calls the “tripartite conundrum” between romantic love, companion love, and sexual desire. I think he has several insights, but realize that the lecture is lengthy.  If you can’t listen to it in its entirety, here is the heart of the matter: