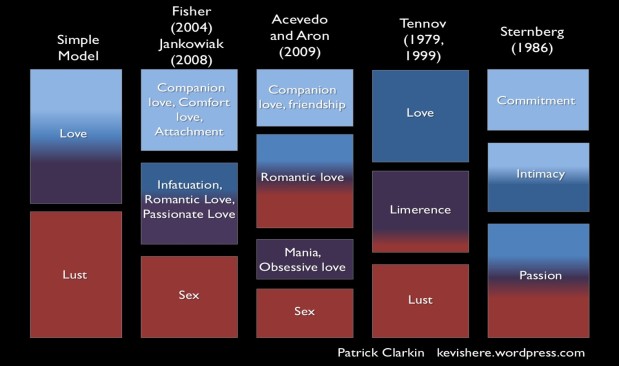 The introduction to this series can be found here.

Summary: There are many ways to put a human life together, including for sex and love. Each path has tradeoffs.

I thought I knew what love was. What did I know? – Don Henley, “Boys of Summer”

There are all kinds of love in this world, but never the same love twice. – F. Scott Fitzgerald

“Mom, love is love, whatever you are.” These words of wisdom came from Jackson, the 12 year-old son of actress Maria Bello, after she revealed to him that she had fallen in love with a woman. Bello’s essay, Coming Out as a Modern Family, appeared in last November’s New York Times, where she bravely reflected on her handful of past romantic relationships (mostly with men), her trepidation in revealing her evolving feelings on love, and the variety of meaningful relationships – platonic, familial, romantic – she had in her life.

In the most important sense, which is of course the sense that Jackson meant, love is love, irrespective of one’s sexuality, gender, or ethnicity. Studies from neurobiology reveal that people in the early stages of romantic love show consistent activation in specific brain regions (the ventral tegmental area and caudate) when viewing a photo of one’s partner. This was true for (1) men and women, (2) hetero- and homo-sexuals, and (3) American, British, and Chinese adults (Zeki and Romaya 2010; Xu et al. 2011). Not that Jackson needed it, because a person’s choices in love should be respected regardless of what neurobiology tells us, but he has science on his side.

END_OF_DOCUMENT_TOKEN_TO_BE_REPLACED

As I continue to read up on the evolution of human mating, a theme that keeps recurring is how complex people are in what they want from their erotic pursuits. Many books, journal articles, and even popular magazines compile lists about the physical features we consider attractive, the traits we look for in a mate, etc. In those lists, we can find patterns, but none can ever be perfect because we are complex, individually and culturally variable, and always in flux, trying to balance an array of wants and needs that shift over time along with our circumstances. No single variable will ever be sufficient to explain what people want. Sometimes it’s Arthur Miller; sometimes it’s Joe DiMaggio.

Here is a sample of the complexity, in list form:

END_OF_DOCUMENT_TOKEN_TO_BE_REPLACED

This is part 12 of a series on the evolution of human mating behavior. Please see the introduction here.

This video is a lecture by the cultural anthropologist William Jankowiak speaking at my alma mater, Binghamton University, on what he calls the “tripartite conundrum” between romantic love, companion love, and sexual desire. I think he has several insights, but realize that the lecture is lengthy.  If you can’t listen to it in its entirety, here is the heart of the matter: