“One of the reasons some cultural elitists – political pundits, novelists, intellectuals – tend to be so unsettled by the Internet is that it has revealed how oceanically broad are the interests of the public in general. Before the Internet, with no way of observing the obsessions of the masses, it was a lot easier to pretend that these obsessions simply didn’t exist; that the nation was “united” around caring about the same small number of movies, weekly magazines, novels, political issues, or personalities. This was probably always a self-flattering illusion for the folks who ran things. The Internet destroyed it. When you gaze …upon the Pacific of strangeness online, you confront the astonishing diversity of human passion.”  — Clive Thompson (2013) Smarter Than You Think: How Technology is Changing Our Minds for the Better 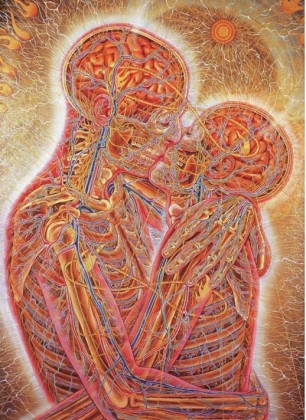 Please bear with me as I try to connect two not very obviously connected ideas: romantic love and our species’ behavioral flexibility. I don’t have it all worked out. Perhaps I’m going down the wrong path altogether.

I started thinking about these things after several friends on social media shared this Mandy Len Catron essay: “To Fall in Love With Anyone, Do This”. Catron describes a time that she and a male acquaintance intentionally tried to induce feelings of romantic love. To do this, they followed two steps, borrowed from a study done by the psychologist Arthur Aron. First, they asked each other a series of 36 increasingly intimate questions. Next, they stared into each other’s eyes for four uninterrupted minutes.

My first reaction when I went through the questions was that I can see how they could elicit feelings of intimacy under the right circumstances and with the right person. To work through all 36 of them would take some time, as they are not typical of everyday conversation. Time itself is could be a factor in bonding. To answer each question would require some thought, as they do not have prepared, canned responses. Some examples from Aron’s list:

It’s not hard to see how these questions could be effective. They probe areas of vulnerability, family background, hopes and aspirations, admiration, and what the two people share in common. Add in four minutes of staring into another person’s eyes and the overall time spent together bonding, and you have a plausible formula for sparking romantic love. So far, so good.

But here’s the part that has me thinking: from an evolutionary perspective, why would these things be good at sparking romantic love? Other species pair-bond (gibbons, albatrosses, prairie voles), and they do so without language. Those species will never be able to share their dreams, insecurities or embarrassing memories with a mate. I can’t even imagine what would a gibbon would be embarrassed about? (“Man, one time I was brachiating through the forest, and I completely missed a branch. All the ladies were watching. I was mortified.”).

What I think this means is that our evolved intelligence, our behavioral and cultural flexibility, and our capacity for language must set human pair-bonding qualitatively apart. That’s not to say that human pair-bonding is necessarily ‘better’ than in other species. In one sense, albatrosses are more successful at pair-bonding than humans are, with divorce nearly nonexistent. Extra-pair liaisons are another matter for albatrosses (nobody’s perfect), but they still return to their primary mate. And albatross mates typically remain together for life, which can be for several decades. Even more impressive is that they can remain so committed without the type of emotional intimacy that language can facilitate. For them, ‘dancing’ is enough to find the right mate.

But for humans, pair-bonding has a level of depth that I would think is unmatched in the rest of the animal world, even if those bonds are not as resilient as those found in albatrosses. If language is unnecessary to pair-bonding across species, it seems almost essential for ours.

Perhaps this is where our evolved intelligence and behavioral flexibility come into play. The fossil record is clear that hominid brain size increased dramatically over the past six million years. Along with bigger brains came increased intelligence, symbolic thought, sophisticated language, and perhaps a loosened ‘genetic leash’ that allowed for greater behavioral and cultural flexibility.

The wide-ranging leash of human behavior. (From the show ‘Cosmos.’)

As people spread across the planet and local traditions grew increasingly diverse, the ability to ‘connect’ with someone romantically would probably have required more than physical attraction. Instead, there would be a greater premium on some compatibility with — or appreciation for — another individual’s cultural compatibility, intellect, and personality, all mediated by conversation. Even for albatrosses, courtship is not automatic, and potential mates are evaluated in part by how they dance. How much more complex the human dance must be, to find compatibility in some meaningful way, given what  Clive Thompson called  “the astonishing diversity of human passion.”

Finally, the neologism ‘sapiosexual’ has increased in popularity over the past few years. From my reading of things, it looks like this word has two definitions. The first is more rigid, when a person considers intelligence to be the primary, if not exclusive, attractive quality in another, regardless of physical attractiveness or even gender. In this more hardline interpretation, sapiosexuality is even akin to a type of sexual orientation. The second interpretation is more generic, meaning someone simply finds intelligence attractive.

In a sense, I think the second meaning is applicable to our species as a whole. There are degrees of intelligence (however we may define that), and we may find some people to be more intelligent than others. But in comparison to other species, each member of our species is probably sapiosexual, since intelligence and language are so integral to forming relationships. Perhaps that intelligence is necessary in order to try to mesh two emotionally and behaviorally complex individuals together.

But I need to think about this some more.

2) The animation of the man walking a dog on the beach is actually supposed to represent climate change versus weather (source). The man, of course, is Neil deGrasse Tyson, and the red line symbolizes increasing temperatures. The blue line behind the meandering dog illustrates how the trend is not perfectly linear. Rather, weather patterns fluctuate, but the overall upward trend is still significant. Anyway, I co-opted this to try to show how humans may be headed in the same general direction in terms of life history (maturation, maybe reproduction, mortality), but with lots of significant cultural and behavioral variation around that path.

6 thoughts on “Sapiosexuality & Our Behavioral Complexity”