We just finished a symposium on “the human biology of poverty,” held at ISCTE-IUL in Lisbon, and sponsored by the The Society for the Study of Human Biology. It really was a great meeting, full of important research on the effects of various forms of deprivation on biology and health in different populations. The complete program can be found here.

I finished my dissertation on how the war in Laos was correlated to the physical growth of Hmong refugees in 2004. The general idea was that early stressors, particularly prenatally and in infancy, can have long-term impacts on growth and health. The model I was working with came largely from David Barker’s (and others’) ‘fetal origins hypothesis,’ based on evidence that low birth-weight infants tended to grow up to have higher rates of things like type 2 diabates, coronary heart disease, hypertension, etc. A classmate in graduate school, Stephanie Rutledge, introduced me to Barker’s work and told me that I’d find it really enlightening. I did. Sadly, Barker passed away earlier this year, but his work helped spawn a new direction in research.

END_OF_DOCUMENT_TOKEN_TO_BE_REPLACED

“Be excellent to each other.” – Bill and Ted (20th century philosophers)

From a commencement speech by George Saunders:

“What I regret most in my life are failures of kindness. Those moments when another human being was there, in front of me, suffering, and I responded…sensibly.  Reservedly.  Mildly.”

Saunders then describes a memory from the seventh grade, when he did not defend the new girl in school who was teased for being different. Forty-two years later, he still thinks of her occasionally, and even though he was not personally cruel toward her, he regrets not going out of his way to extend her kindness. He then questions why kindness is often lacking, and he looks for prescriptions to make it more common.

The speech is a good one, and it stirred up some personal memories of instances when I could have used some kindness from someone. Sometimes it came; others it didn’t. There were also situations that called for me to be the one to extend kindness to someone else who needed it. Sometimes I stepped up, although probably not as consistently as I should have. Fear can be a powerful deterrent. Like Saunders, I regret those missed opportunities.

Of course, the opposite of kindness is cruelty, and I’m often distressed by the latest story of human callousness, where someone is belittled for not conforming to another’s standards. For those of us who are not Rhodes Scholar Olympians (which is to say, nearly everyone), we all fall short of socially constructed ideals in some way. Either we’re not attractive enough, or not stylish, athletic, or smart enough (or too smart). Too red. Too blue. Too promiscuous or too chaste. Too tall. Too short. Too neurally atypical. Or, we’re the ‘wrong’ weight, gender, race, sexuality, ethnicity, social class, or speak the wrong dialect. We can be incredibly creative at finding the holes in the armor to bring someone down.

For such an intensely social species, we often seem to go out of our way to make each other want to leave the group.

END_OF_DOCUMENT_TOKEN_TO_BE_REPLACED

An October poll of 1,000 likely voters found that Americans are increasingly concerned about income inequality. When asked: “How Big a Problem is Income Inequality in the US?,” the majority (74%) replied that it was either a big problem or somewhat of a problem. Predictably, there were differences in opinion by political ideology, but a majority of liberals (94%), moderates (81%), and conservatives (55%) answered that inequality was at least somewhat problematic. However, as is true of many polls, it was not specified exactly what people found unsettling about it. I suppose there are many reasons that people might find increasing inequality (and climbing rates of poverty) to be troubling, but I wanted to focus here on inequality and health, particularly on obesity.

First, what do we mean by poverty? I remember watching an interview on PBS with the economist Jeffrey Sachs years ago (transcript here – thank you, Google), where he distinguished between two types of poverty. The first was an extreme form, which he called the type of “poverty that kills.” The other type was more of a poverty of inconvenience or jealousy. I don’t want to over-interpret Sachs’ meaning. It was a passing phrase in an interview from ten years ago, and his primary focus was on alleviating the extreme poverty faced by more than a billion people in the world living on $1 per day (see Sachs 2005). Elsewhere, Sachs has lamented that the media have ignored poverty in the United States at a time when “the U.S. has the greatest income inequality, highest per capita prison population and worst health conditions of all high-income countries.” His credentials in fighting poverty are unassailable. But I cite the old interview here because I think his descriptions (‘poverty that kills’ vs. ‘poverty of jealousy’) might resonate with many people today, and not necessarily in a good way.

END_OF_DOCUMENT_TOKEN_TO_BE_REPLACED

On the surface, it may not be so clear where war, health, and evolution intersect. From the perspective of biological anthropology, many have called for a holistic, transdisciplinary approach to human biology and health which considers the environment as the totality of its evolutionary, ecological, and social components, including social inequality (Little and Haas 1989; Thomas et al. 1989; Wiley 2004). 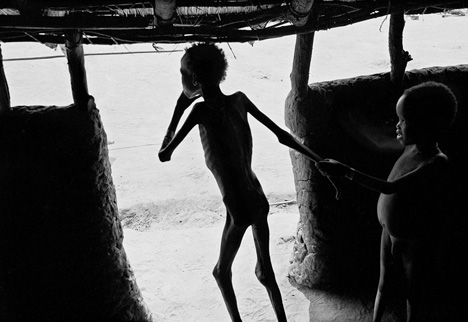 More than a decade ago, Leatherman and Goodman (1998) suggested that biological anthropologists put more effort toward better understanding what they termed the ‘biology of poverty.’ In this sense, poverty is an ‘environment’ that may induce consistent, but obviously varying, biological responses depending upon local circumstances. Similarly, war can be conceived as a biological environment. At least in the short term from an evolutionary point of view, wartime conditions may be as biologically challenging as some of the classic ecologically extreme environments faced by humans (circumpolar, tropical, high-altitude, desert, etc.) (Clarkin 2010).

END_OF_DOCUMENT_TOKEN_TO_BE_REPLACED

A recent book, “War and the Health of Nations“,  by Zaryab Iqbal (Political Science, Penn State) takes a look at the associations between national health statistics and the presence and duration of war.

Chapter 8 explores the topic of forced migration and population health, though with a novel approach. Instead of exploring the ways that forced displacement by war is associated with health in refugees themselves, Iqbal looked at whether an influx of refugees affected overall health statistics in the host country. Utilizing aggregate health data from the World Bank and the number of refugees entering a state in a given year, she tested for associations between the two while accounting for multiple covariates (presence and duration of conflict, GDP, population size, openness to trade, and how democratic/autocratic a country is).

END_OF_DOCUMENT_TOKEN_TO_BE_REPLACED

At the population level, childhood growth is often seen as a marker of health and the quality of the environment. When populations get taller in a few generations, this is likely due to some improvement in local conditions (better nutrition, less infection, cleaner water supply, etc.). Conversely, when linear growth declines, it is usually because local conditions (ecological, economic, political) have deteriorated. Two recent working papers illustrate how this pattern applies to war conditions.

Harvard researchers are reporting in the journal Obstetrics & Gynecology that the average birth weight in the U.S. has actually dropped over the past 15 years. The study looked at more than 36 million full-term births between 1990 and 2005. After controlling for confounding variables, it was found that birth weight had decreased by 52 grams. This trend ran counter to that found previously, which was that birth weights had been steadily increasing over the last century. A secondary analysis suggested that the drop was not due to a change in maternal demographics, as the trend was also found in a subset of white, well-educated non-smoking women as well.