If you live in southern New England as I do, it can be hard to avoid the name Putnam. Putnam Cottage, Putnam Memorial State Park, Putnam Monument (Brooklyn), Putnam Monument (Hartford), Putnam Street and Putnam Pike in Rhode Island, Putnam House, Putnam County (several), Putnam Farm, Put’s Hill, Putnam Pond.  My cousins grew up right near the town of Putnam Connecticut. There’s even a beer named after Putnam, brewed in Connecticut of course, and described as “full of flavor and unabashed amazingness.”

Traveling through the area, there are road signs for all of these memorials, dedicated the Revolutionary War general Israel Putnam, who was called “the provincial army’s most beloved officer” by historian Nathaniel Philbrick. Putnam was born in Massachusetts and lived most of his life in Connecticut, so it makes sense that any monuments of him would be found in this region. It’s interesting to note that many of these tributes were established years, decades, or even nearly two centuries after Putnam’s death in 1790. The town of Putnam, Connecticut was named in 1855. His monuments in Hartford and Brooklyn were dedicated in 1874 and 1888, respectively; the state Park was created in 1887, and his statue there was made in 1969. 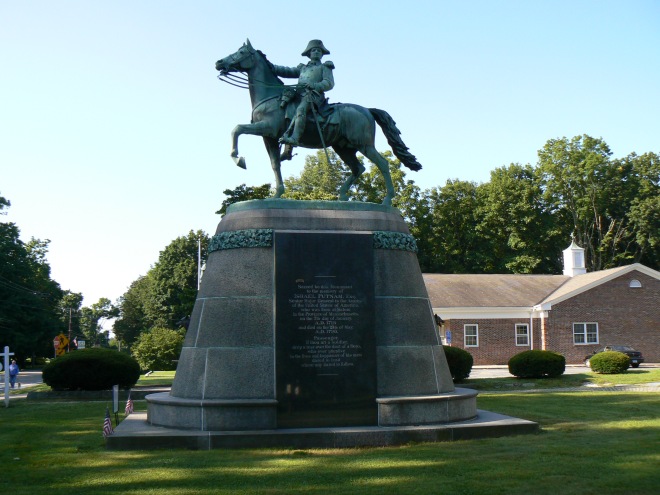 The anthropologist Marshall Sahlins (1976) once told a story of a sociologist who studied equestrian statues in New York, noting the relationship between the number of feet the horse had in the air and the status of the rider. One foot in the air connoted something different than two feet or none. One observer argued that the study was complicated by the fact that people didn’t ride horses anymore. Because horses were largely obsolete, societies were less restrained in how they could consider and present them. To which another observer replied, “It’s true that people don’t ride horses anymore, but they still build statues.”

The point is that our connections with our past are continuously made and remade and that the building of monuments is therefore couched within the values of a society. Historians, sociologists, and geographers have noted that nations are “imagined political communities” (Anderson, 1983; Johnson, 1995) and that traditions and monuments in public spaces are often “invented” (Hobsbawm and Ranger, 1983). With regards to Putnam, this is not to say that he was imaginary or never existed, or that his deeds in life are not worthy of being remembered. In this case, Putnam is merely one local example. Rather, as Hobsbawn wrote: “all invented traditions, so far as possible, use history as a legitimator of action and cement of group cohesion.” The monuments to Putnam seem to follow in that vein, acting as part of a nation’s origin story of a nation, touting his individuality, dignity, ruggedness, courage, and sense of sacrifice.

Several years ago, the Native American activist and former Vice Presidential candidate Winona LaDuke came to speak at my university. I remember her saying that it was odd that Americans so often chose to memorialize people at the expense of nature. She gave the example of referring to Denali as Mount McKinley. She asked the audience something along the lines of “Doesn’t it seem odd to name something as majestic and eternal as a mountain after something so small and ephemeral as a man?” Here we see two different approaches: one emphasizing a human connection with the natural world, the other representing a dominance over nature and emphasizing nationhood via honoring prominent individuals.

Again, this isn’t specific to Putnam. Aside from Putnam Pond and Put’s Hill, he doesn’t have natural formations named after him. The larger lesson is to remember to pause and reflect on our relationship with our monuments, what values they represent, and how they affect our perception of our past and our present. Every time I pass by a public marker bearing the name “Putnam” (as well as other names) I try to reflect on those things.