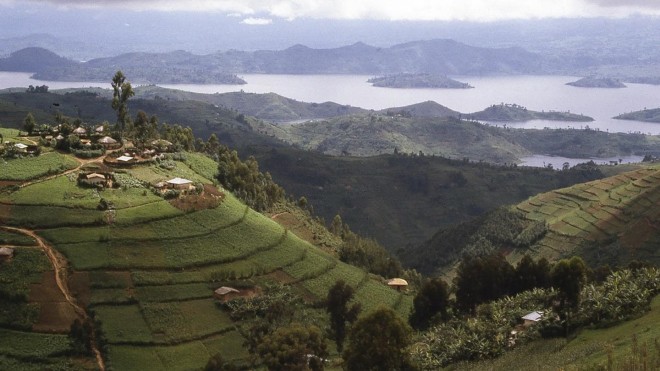 The land of a thousand hills (source)

“Incitement is a hallmark of genocide, and it may be a prerequisite for it.” – Susan Benesch

A few years ago, David Yanagizawa-Drott of Harvard’s Kennedy School of Government examined the effects of radio propaganda on the 1994 Rwandan genocide, which led to the deaths of 0.5 to 1.0 million people (Yanagizawa-Drott, 2014). Rwanda is sometimes called “The Land of a Thousand Hills,” and given the effects of uneven topography on radio transmission, he reasoned that villages with better reception would have been exposed more to incitement to violence against the Tutsi minority. In particular, the Hutu-controlled radio station Radio Télévision Libre des Mille Collines (RTLM) was infamous for dehumanizing the Tutsi by calling them “cockroaches” and calling for their extermination.

Yanagizawa-Drott noted that others had pointed to the role of RTLM and other mass media in fomenting hatred in Rwanda, but no one had attempted to quantify the effect. He calculated the area with radio reception within each village and then correlated it with number of persons prosecuted for violent crimes committed during the genocide in each village, including as a member of a militia (n = 77,000) or as an individual (n = 432,000).

He found that “a one standard deviation increase in radio coverage is associated with a 12–13 percent increase in participation in total violence. The effect is similar for militia violence (13–14 percent) and individual violence (10–11 percent).” Furthermore, there was a “spillover effect,” where the number of people engaged in militia violence increased significantly when neighboring villages had radio coverage. Overall, he estimated that nearly one-third of the violence perpetrated by militias could be attributed to the broadcasts.