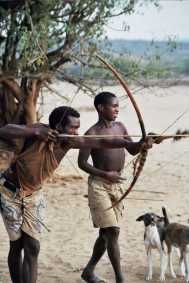 The BBC has compiled what looks to be an absolutely visually stunning television series, titled ‘Human Planet.’  The footage is said to contain video from 80 different locations, highlighting the relationship of humans to various ecological conditions.1 The description from the website:

Uniquely in the animal kingdom, humans have managed to adapt and thrive in every environment on Earth. Each episode takes you to the extremes of our planet: the arctic, mountains, oceans, jungles, grasslands, deserts, rivers and even the urban jungle. Here you will meet people who survive by building complex, exciting and often mutually beneficial relationships with their animal neighbours and the hostile elements of the natural world.”

Have a look for yourself at the preview:

Biological anthropology has a long history of examining the various ways that humans interact with, and adapt to, their various environments: genetically, developmentally, physiologically, and behaviorally (Frisancho, 1993; Moran, 2007). It is uplifting to think that while there are close to seven billion of us now, our species got its tenuous start living in small bands as African hunters and gatherers before becoming ubiquitous across the globe and full of the diversity we see today. From our humble origins, humans have branched out to become horticulturalists, fishers, pastoralists, and even urbanized city dwellers reliant on industrialized agriculture.

Still, all human populations remain a single species, composing one big family in both a real and metaphoric sense. Our numeric success was at least partially due to luck, but also our biobehavioral plasticity as a species2. For example, as Josh Snodgrass (U Oregon) and colleagues wrote about human settlement in circumpolar environments: 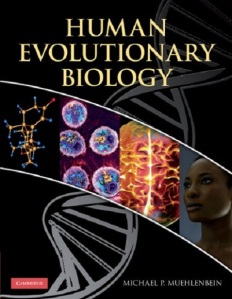 The concepts of evolution, adaptation, and behavioral flexibility continue to form the corner stone of biological anthropology, as seen in the recent book Human Evolutionary Biology (edited by Michael Muehlenbein, U Indiana, Bloomington). The book contains 30+ chapters that apply evolutionary theory to an array of topics, including phenotypic and genotypic variation, reproduction, growth and development, and infectious and chronic disease. The authors include some very high-quality researchers, too many to be mentioned individually.

I’ll make one exception, however, for my wonderful colleague at UMass Boston, Colleen Nyberg. Noting the seemingly inexorable global trend toward urbanization, she and her co-author, Thom McDade3 (Northwestern), explored the epidemiological effects of “cultural and economic transitions” on health. Their literature review is quite extensive, and they do an excellent job of summarizing the history of the study of acculturation, as well as how specific biological outcomes (e.g., child growth, chronic and infectious disease, mental health, and substance abuse) and regions (Pacific, Africa, Arctic, Latin America) have been affected. Their concluding paragraph leaves room for future research and calls for more nuanced modes of thinking about this topic:

“Cross-sectional, ecological comparisons have dominated research to this point, and have provided a firm foundation on which to build more sophisticated models that attempt to capture this variation. There is tremendous potential to develop new conceptual and analytic models that link context, behavior, and health at the individual level, across time. By thinking critically and creatively about how to define and measure shifting social, cultural, and economic contexts, and by linking these measures to physiology and health, we greatly enrich our understanding of human biology and processes of adaptation.” (McDade and Nyberg 2010: 594)

In science fiction, one view of the future is that our entire planet may one day resemble Manhattan or Hong Kong (akin to Isaac Asimov’s Trantor, or George Lucas’ Coruscant)4. That will probably never transpire. However, we can be certain that the increasing shift away from more traditional ways of life to a more urbanized, industrialized, digitally connected lifestyle will continue to have real effects on human biology and health. McDade and Nyberg remind us that the study of this epidemiologic transition should be approached in nuanced ways, with an appreciation for context and local conditions.

1. The website Anthropologi notes that the BBC consulted several anthropologists for ‘Human Planet,’ but remains concerned whether non-Western people will be exoticized for the sake of television.

2. My advisor at Binghamton, Mike Little, used to say in lecture, “biology is behavior, and behavior is biology.”

3. Apologies for all the name dropping. There are a lot of good people out there who deserve wider recognition.

4. Before majoring in film at USC, George Lucas was an anthropology major in junior college. I’d say that combination worked out for him.