Earlier today there was a report that people in Hawaii received a warning that a missile was incoming. This turned out to be a false alarm, but for approximately twenty minutes many people believed a missile attack, possibly a nuclear one from North Korea, was imminent. 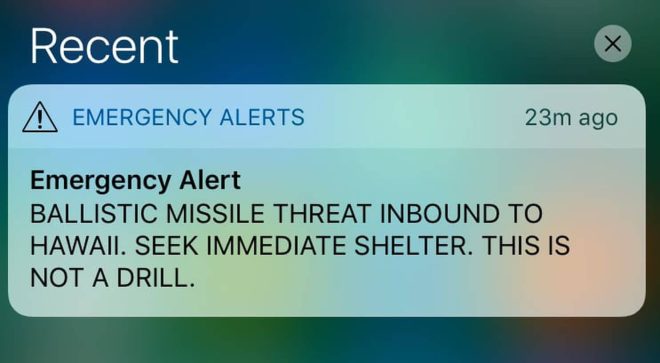 As with everything these days, the discussion online seemed to revolve around who was to blame. It appears that someone pushed the wrong button, causing anxiety and fear for many people. It could have been worse, had the wrong people panicked.

I immediately thought of Robert McNamara’s recollection of the Cuban Missile Crisis from the documentary “The Fog of War,” and the lessons he learned from that episode.

The major lesson of the Cuban Missile Crisis is this: the indefinite combination of human fallibility and nuclear weapons will destroy nations.

Is it right and proper that today there are 7,500 strategic offensive nuclear warheads — of which 2,500 are on fifteen minute alert — to be launched by the decision of one human being?”

If McNamara were still here, I think he might say that the focus shouldn’t be on trying to find the individuals responsible for the false alarm. Instead, it should be that mistakes and poor communication are inevitable, which is a recipe for disaster when nuclear weapons are involved. As McNamara said, this is true even when rational individuals are involved. He might be even more appalled today, given the irrationality on display from some global leaders.

One thought on “The Fog of Warnings”